Yesterday I found these notes in my inboxes:

Hiya Kate – I’m doing a story about the friendship between arthur phillip and bennelong for tomorrow’s paper..I’d love to get your input…Chris Hook, Journalist, Daily Telegraph.

hello there …I’m a daily tele journalist doing a story for tomorrow about Australia Day and the friendship between arthur phillip and bennelong.. I’d love to get your insight!

Mr Hook also contacted me on twitter and facebook. I didn’t reply, for various reasons (explained below), but knew I could expect the following story this morning: 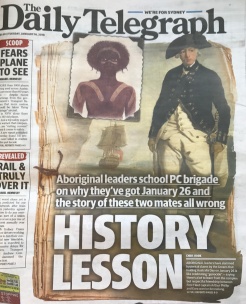 Here is my belated response:

Thanks for your emails and messages yesterday. I have in the past replied to every journalist who has ever contacted me about Bennelong, feeling it part of my job as an employee of an Australian public university.

I didn’t reply to you, though, for a few reasons—the main one being that I opened them too late in the day. My apologies.

Another reason, I must admit, was the way my heart sank when I read ‘daily tele journalist’ and ‘Australia Day’ in the same sentence. You probably know what I mean—no doubt it’s how you feel when you see ‘Guardian columnist’ and ‘Anzac legend’ put together.

[A third reason, by the by, was due to the address. I always tell my students that if they email me with a hiya or a hey, etc, they’ll get a similarly unfocused and incomplete response.]

I read your story this morning, however, with keen interest. And really appreciated parts of it. The way you frontline indigenous voices, include some scholarship, and give a lot of historical detail is heartening.

But you can surely guess that I disagree with the main thrust of the article. The relationship between Phillip and Bennelong, even if it was as friendly as you suggest, does nothing to discount the histories of violence and dispossession that also took place and which have continuing, concrete legacies today. As it is, I think ‘friendship’ is too strong a word. How friendly can one be with one’s former kidnapper? They were diplomatic counterparts – both saw this, both got on with their respective jobs, which served opposing agendas. When Smith says Bennelong has been misrepresented and I say he was never a doomed outcast, we were showing that Bennelong had instead a rich and full life with his own people. Not that he was so much happier with the British than has been known. You know all this, of course, because it is apparent that you read our articles.

I could not agree more with Ms Price, and you, that the “complexity” of early contact stories “needs to be brought to the fore.” I also, actually, agree that the Australia Day date is a less urgent matter than some others we might be discussing with regard to indigenous-settler relations and Australian history in general. But symbolism is always more potent than most ever allow – no one knows this more deeply than the Right, after all, with their visceral attachment to certain dates in the annual calendar. Symbols are gateways into saying who a group is, what they are proud of, and what they will aspire to in the future. You know this because Australia Day is evidently a gateway for you to articulate a vision of a nation that is more united and mutually understanding among its several parts than it is currently. You will therefore instantly recognise that for others it serves as a gateway into seeing how deep the trauma of loss has been, and how little the commemoration of one particular European-led event does to address it.

How to overcome this seemingly unbridgeable divide? You could start with more stories about “complexity” than about the “whining PC Brigade”. Price in your article says that the Australia Day debate “is just an easy option for those who feel guilty, it just makes them feel better about who they are.” Who exactly do you reckon Price thinks settlers are? Why don’t you write about that?

I wish you the best of luck in your future endeavours.