Three Lives in an Age of Empire 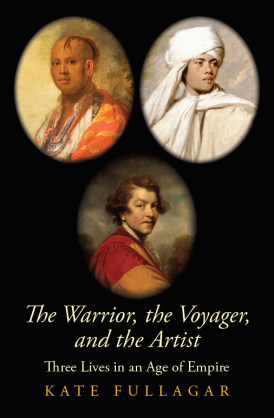 Recently awarded the Premier’s Prize for General History – the citation here, and some words from me here (at the 27 minute mark).

This book tells the unlikely story of the connections in the eighteenth century between a Cherokee warrior in the southern Appalachians, a Raiatean voyager from the Tahitian archipelago, and the British artist who painted them both. It is a story about the globalizing force of the empire that touched them all, but also of the rich diversity of the eighteenth-century world. Told as three loosely linked biographies, the book gives equal weight to each man. It narrates for the first time the whole life of Ostenaco, tracing his emergence as a leading Cherokee warrior, his engagement with colonists throughout his life, and finally his rejection of all imperial politics during the American Revolution. It delves similarly into the full experience of Mai, exploring his youth in Ra‘iatea in the eastern Pacific, his confrontation with war and displacement, his voyage to London in the 1770s, and his return home again with a burning ambition to right past wrongs. Finally, it weaves throughout these biographies the imperial story of Joshua Reynolds, who was born near the bustling English port town of Plymouth, rose to the top echelons of British society and yet maintained always an ambivalence about his nation’s expansionist trajectory. This book shows how Indigenous people pushed back and shaped empire far more than is usually acknowledged. It also reveals how much more conflicted Britons were about empire in this era than credited, even while they witnessed its reach into every corner of the globe. The book is a timely history about Indigenous survival and imperial contingency, written through the portraits of three remarkable individuals.

“Kate Fullagar peers into the soul of the eighteenth century, discovering the shared human challenges that connected three very different men, three faces of the whirling gyre of the British empire. As deep and luminous as a Reynolds portrait, and as wide and wondrous as the Pacific, The Warrior, the Voyager, and the Artist will astonish.”— Jane Kamensky, author of A Revolution in Color: The World of John Singleton Copley

“Fullagar does for biography what Reynolds wanted to do for portraiture—have it speak with the authority and humanity of history. But where he failed, Fullagar brilliantly succeeds.”—Peter Brunt, Victoria University of Wellington

“Spanning three land masses and two oceans, The Warrior, the Voyager, and the Artist exemplifies the very best of the new biography, and is a must read for anyone interested in the cultural history of the British Empire.”— Eliga Gould, author of the Among the Powers of the Earth:  The American Revolution and the Making of a New World Empire

“A deftly‑told story of three inter‑connected but very different lives that challenges many of the clichés about the history of the British empire. Fullagar’s account is subtle, persuasive and humane.”—John Brewer, California Institute of Technology

The Yale Press Blog summary of it is here, and an excerpt from Lapham’s Quarterly is here.

Bryan Rindfleisch on H-Net: “Kate Fullagar weaves together a masterful story of three disparate individuals whose paths intersected only briefly in early modern London, but together reveal much about … broader imperial, Atlantic, and Pacific worlds… Altogether, Fullagar challenges historians of the British Empire … to realize a more authentic narrative of empire that includes Indigeneity during the eighteenth century. And she blazes the way forward.”

Nicholas Thomas on Inside Story: “The Warrior, the Voyager, and the Artist is imaginatively conceived and engagingly written. It builds on biographic experiments such as those of Natalie Zemon Davis and the historical anthropology of Greg Dening and Anne Salmond, acknowledging that the lives linked by Reynolds’s portraits were not all the same, and not those of “selves” of the modern individualistic sort.”

Sophie Forgan on CCS: “Does the author achieve her aims of using these three lives to write a chapter in the history of the British Empire as seen through the experience of the indigenous individuals in question? … the answer is a definitive “yes”.  It is well written, with a real sense of biographical narrative and drive, following the travellers on their voyages to Britain, and back to their homeland, and their subsequent lives.  There is an acute awareness of indigenous protocols of behaviour, practices and language …”

Jace Weaver in WMQ: “Fullagar … skillfully pieces together the lives of these two indigenes from fragmentary evidence. She also vividly depicts their wider communities and the world in which they operated … [Her] monograph is pushing back against a moment when nostalgia for empire seems on the rise … Fullagar does not deny the brutality of empire or its pernicious and pervasive effects. She makes clear that it deserves no one’s nostalgia. Hers is a tale—three actually—well told.”