Last year I was honored to launch the latest book by my friend and collaborator, Mike McDonnell. The transcript is below.

You are all Mike’s friends and colleagues, so you probably know—or you should know—the basic gist of this book. If you don’t: it’s about the Native Americans who live at the top end of what is today called Lake Michigan – and especially of the Odawa Anishinaabeg (who I now know how to pronounce thanks to Mike’s book). It’s an account of the Anishinaabeg over the 17th and 18th centuries – their changing social and economic dynamics and their diplomatic relations with outsider Indians and with non-Indians. But this is no particularist history of a group of people that most Americanists can afford to ignore in their national histories. Mike’s central claim in the book is that everything you thought you knew about early American history centred in fact on the wrong geography, respected the wrong characters, and definitely had the wrong understanding of revolutionary politics. What Mike shows instead is that if you’re really interested in how America came to be modern (that is, how it became the US), then you need to lift your eyes up from the eastern seaboard and look to the interior; you need to reckon not just with battles between different types of British men but with battles between various Native nations and several European empires; and, finally, you need to see the revolution less as the triumph of freedom over tyranny and more as a rage against an imperial regime that was profoundly influenced by Native demands.

If you’ve hung around Mike for any length of time, you may have already gathered his general view of America’s foundation myths. Here, finally, is your chance to read the evidence for his case. Three hundred pages of why and how Native Americans from the Lakes region matched Europeans well into the 18th century; why and how these guys staged the first actual war for independence on the continent in the shape of Pontiac’s onslaught (13 years before Jefferson’s declaration); and why and how this subsequently forced the British to legislate certain measures that pushed some land-obsessed settlers completely over the edge.

That’s it in a nutshell anyway.  Now, I had the pleasure of reading this book in parts last year, and also this year in its lovely hard-bound version, so I’m happy to chat about its contents with anyone so inclined, perhaps over a quiet drink in the kitchen afterwards….

But I am aware that many of you have attended Mike’s seminars recently where he has made the case of this book more eloquently than me. Also, if you haven’t figured out his views on the revolution yet, you really haven’t been paying attention.

So instead of more history tonight, I thought I’d spend the rest of my time talking about Mike’s history-making. This book is Mike’s second monograph. His first was the prize-winning Politics of War, an important contribution to the re-imagining of the American Revolution from the view of the Virginian underclasses. It was published by the inestimable Omohundro Institute at Williamsburg. An important book, a doorstopper, and like most first monographs mostly read by fellow-specialists.

For his second book, I know that Mike was keen to try and reach a wider audience – perhaps coloured especially by his deep commitment to university social inclusion over the last few years. He set about, and of course instantly acquired, a contract with the distinguished ‘crossover’ imprint, Hill and Wang. And here I don’t mean ‘crossover’ in the popular televisual sense of bridging life and death, but instead the more prosaic, but in some ways equally difficult sense, of bridging academic and trade markets.

It was a challenge – even for a writer as fluent and jargon-allergic as Mike. He drafted, and he re-drafted. His editors wanted contemporary analogies. His reviewers wanted cuts.  His best mate Woody said he was bored. The crossover imprint meant the book took longer to appear than it might have otherwise.

So to find out whether Mike succeeded or not, I decided to track down not the academic response to the book but the response of that illusive beast, the ‘general reader’….

It should be said here, though, as an aside, that the academic response has been remarkable. Native American historical experts such as Colin Calloway have called it compelling and essential. Kathleen DuVal called it magisterial and a page-turner (which it is). Many of you will have also read the phenomenal LA Times review of the book, which called it “a work of genius” and a “master class in how to do history right.” The LA Times, I might add—just ‘cos I’m a bastard—additionally said that “the miracle of this book isn’t simply [its] bold and counterintuitive claims but the ways in which McDonnell has mined the archives for evidence to back them up.”

But I digress. I was on the track of the general reader…. and so I turned naturally to Amazon. As many of you know, Amazon allows any reader to offer a review and to rate a book out of five stars.  As many of you also know, general readers can be much tougher than fellow academics. And it’s true that Mike has faced some harsher critiques on Amazon than he has in the literary press. Harsher but not entirely groundless…. For example, you can’t not respect someone like “Joseph”, who said, frankly, that “this book reads like a law text …. just fact after fact.” Now I’ve never read a law text so I’m not sure about that comparison, but, indeed, there are a lot of facts in this book.

There’s also “John,” who queried the title a little bit, asking just how masterful could we say the Annishinabeg were, if by the late 19th century, they had lost more than they once had ….  I think maybe John has somewhat misunderstood the point of a history book, but his remark is not without poignancy.

Overall, though, other than Joseph and John, Amazon reviewers have agreed with the academic response more than they have disagreed with it. Roman for instance thought it was “fascinating.” Laura thought it was “very interesting”, and Ned said it was simply “wonderful.”

But the reviewer who most interested me was Doug. Doug gave the book 4/5 stars, which straight up made me think that Doug was my kind of reviewer…

Doug found Mr McDonnell’s treatment of American Indian history from an Indian perspective refreshing. He thought it uncovered many aspects of Indian society that had been obscured in the US history textbooks of his youth. He said: “I have new clarity of how kinship and self-interest played a key role in [Indian] decision-making, and how inter-tribal conflicts and alliances were as important as [Indian] interactions with the French, the English, and finally the Americans.”

Doug at this point laid his cards on the table. “Some may claim that a non-Native Australian should not presume to put forth an Indian perspective, but I think he does a good job … Although I consider myself well-read in early American history, for a layperson, this book has done much to open [up] my perspective on Indian culture … I have thought much about its contents after putting it down.” 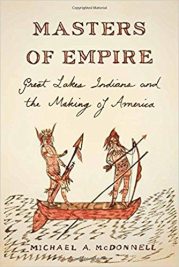 It’s this final line that reverberates with me.  I’m very pleased for Mike that his peers and mentors think that this book satisfies as a major contribution to scholarship. I think it satisfies as this too. But I know Mike wanted to do more than that. The fact that Doug is still thinking about this book even after finishing it is, to me, an answer to that ambition. Doug was always going to be Mike’s biggest challenge.  Doug’s response to Masters of Empire is a true declaration of its success. May I ask you to join me in raising a glass to the Anishinaabeg of the Great Lakes, to Michael McDonnell, and to Doug.